By Rhys Blakely, Science Correspondent, in THE TIMES, 14 April 2020

The government’s chief science adviser has defended the timing of lockdown measures after it was suggested that the faster implementation of restrictions in Ireland significantly reduced the number of deaths. 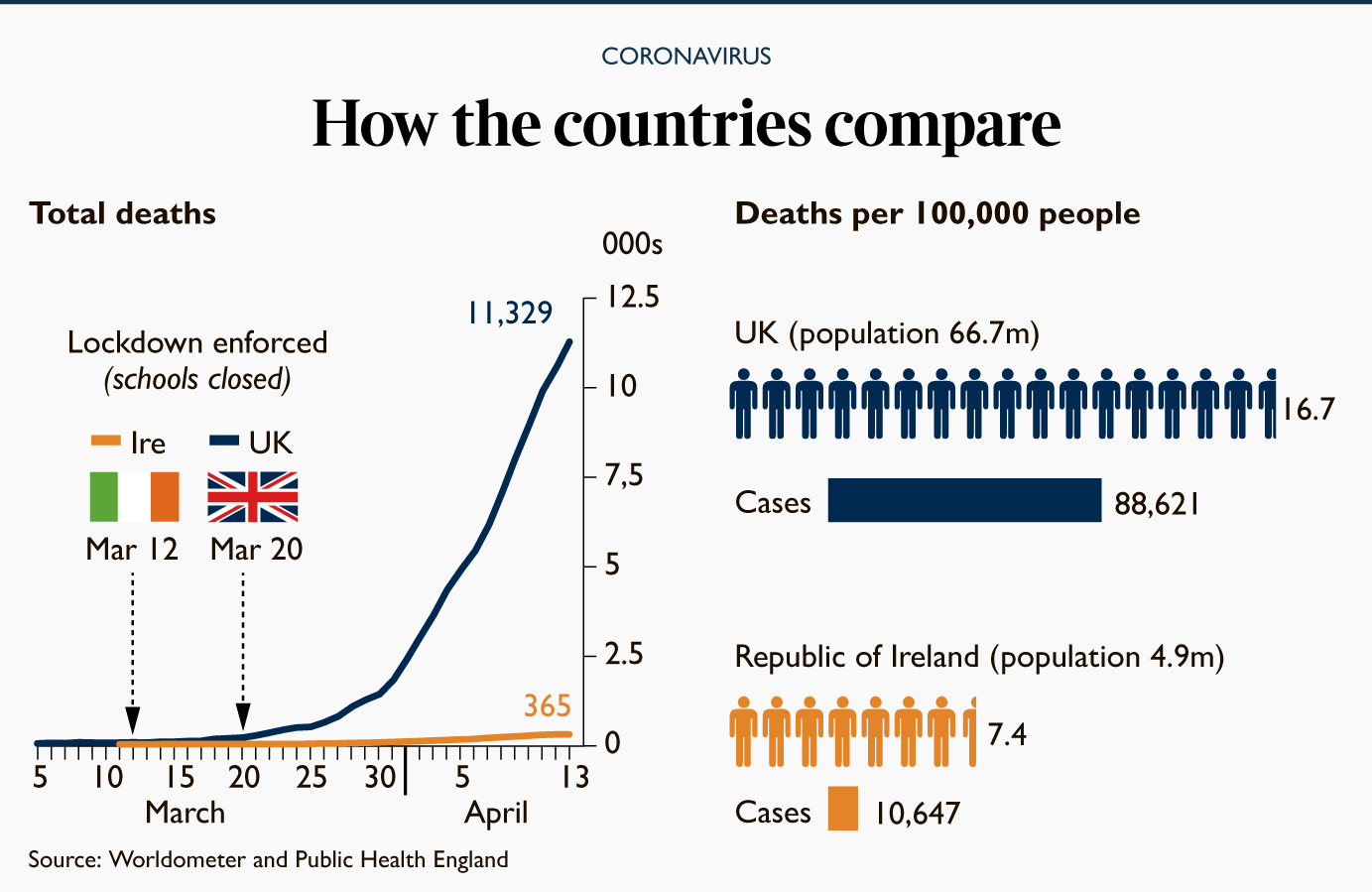 Asked if the UK should have acted sooner, Sir Patrick Vallance said: “The aim all along has been to get the numbers down, make sure we keep the numbers below NHS capacity and ensure the NHS can function. So far that is exactly where we are, with heroic efforts from the NHS.”

Sir Jeremy Farrar, director of the Wellcome Trust and a member of the scientific advisory group for emergencies (Sage), which advises the government on Covid-19, has said that Britain could end up with the highest death toll in Europe.

Jonathan Ball, professor of molecular virology at the University of Nottingham, said: “This is such an explosive virus. If you’re reacting rather than being proactive you’re going to put your health service under pressure.”

As the scale of the crisis dawned last month, Ireland and Britain took different approaches. On March 9 the Irish government cancelled all St Patrick’s Day parades, which were to have taken place the following week. Mr Varadkar said on March 12 that schools and colleges would close, and banned indoor gatherings of more than 100 people. By March 15 pubs were closed as well.

Boris Johnson waited until March 20 to shut schools and order pubs, cafés, restaurants, bars and gyms to close. Three days later he announced restrictions on people’s movement. Asked on March 12 about the contrasts with Ireland, Mr Johnson’s spokesman had said: “We follow our own advice, they will do the same.”

Relative to the population, Ireland is also testing far more for the virus. On Saturday it processed nearly 8,000 tests, using German laboratories. The UK, which has a population more than ten times the size of Ireland’s, processed 18,000. 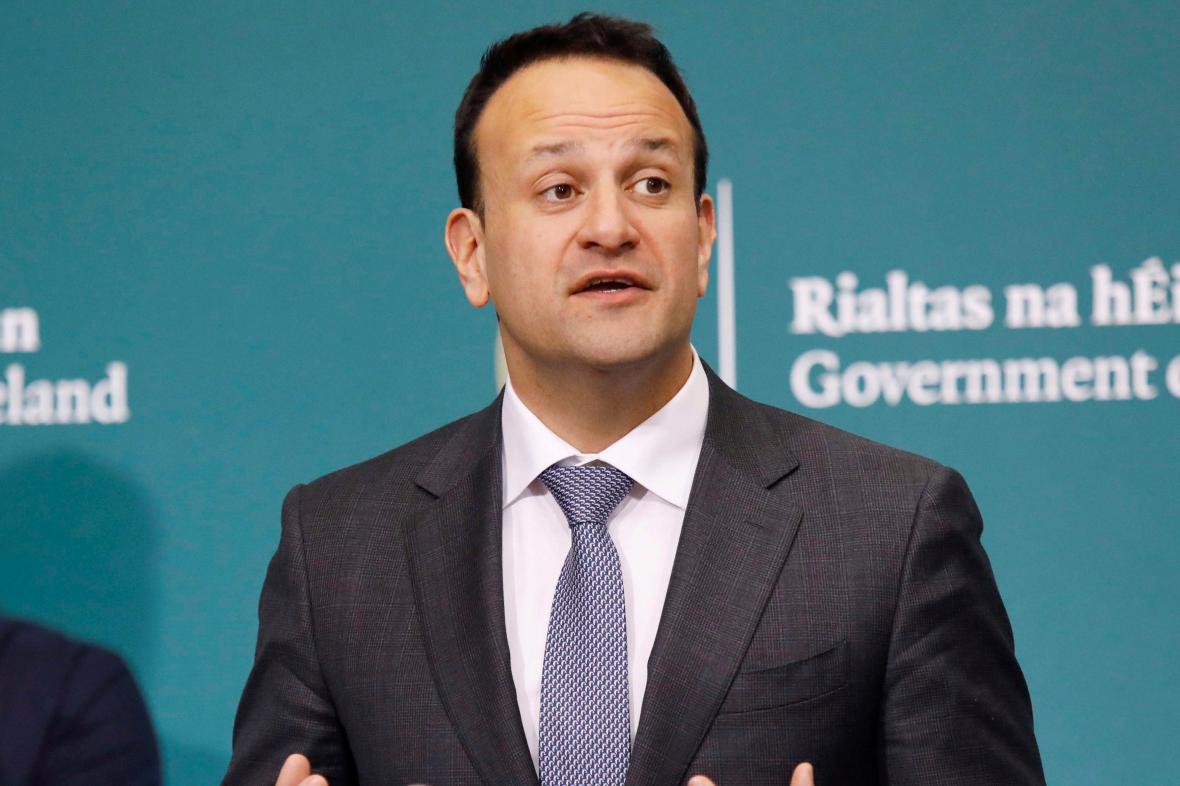 However, analysts said that the overall infection levels in the two countries were not known and that until a successful exit from the lockdown had been achieved it would not be known whether Ireland’s speed had prevented deaths or merely delayed them.

“These crude numbers could prove to be very misleading,” Thomas House, a reader in mathematical epidemiology at Manchester University, said. “This is going to be a long epidemic and there was never going to be a quick fix.”

Dominic Raab, the foreign secretary who is deputising for Mr Johnson while he recovers from Covid-19, rejected “like-for-like” comparisons with other countries, saying that the epidemic is more advanced in some regions than others.

Debate raged on social media yesterday. In a series of tweets that were shared tens of thousands of times, Elaine Doyle, whose profile says that she is a writer and researcher with a special interest in the history of medicine, criticised the British government for what she characterised as unconscionable delay.

“While Boris was telling the British people to wash their hands, our taoiseach was closing the schools,” she said. “While Cheltenham [festival] was going ahead, and over 250,000 people were gathering in what would have been a massive super-spreader event, Ireland had cancelled St Patrick’s Day.”

On March 14 the Stereophonics performed in Cardiff for several thousand people. “I remember watching that video being posted on Twitter that Saturday night, and feeling sick to my stomach,” Ms Doyle said. “How many people were being infected, at that very moment?”

She suggested that by acting swiftly Ireland had bought more time to increase its testing capacity and prepare its health service. Ireland has 6.6 critical care hospital beds per 100,000 of the population, compared with Britain’s 6.5 per 100,000.

However, although British hospitals have been under intense pressure neither country has run out of intensive care capacity, and scientists cautioned against direct comparisons.