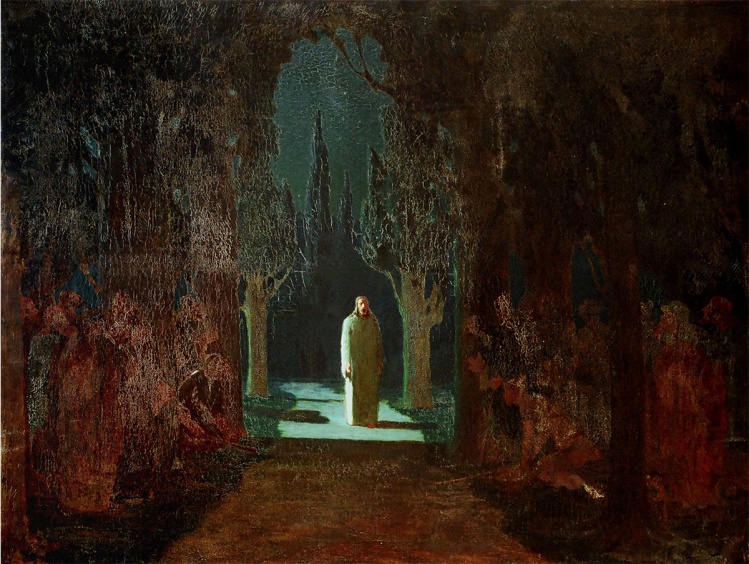 Christ, too, felt isolated in the days before his death. (Painting by Arkhip Kuindzhi

A few days ago, waiting to go through security in Tel Aviv airport, I watched the maneuverings of the young man before me in the queue. As we shuffled forward, he always had a suitcase five feet in front of him and behind, so that no one could get near him. He may have been wise, but it was a powerful symbol of what the virus means for millions of people: isolation, keeping one’s distance. The very presence of others may be a threat, as one may be for them.

Isolation can be more terrible than death. We must all die, and for many it comes as a welcome relief. But isolation saps our very humanity: grandparents being isolated from their grandchildren, lovers separated from each other. We are touched into life by each other, from tiny touches to making love. A character in a novel by Jonathan Safran Foer says: “Touching him was always so important to me. It was something I lived for. I never could explain why. Little, nothing touches. My fingers against his shoulder. The outsides of our thighs touching as we squeezed together on the bus.” When the coronavirus threatens, life-giving touch might become deadly.

The evening before I flew, I went to the Holy Sepulchre in Jerusalem, and entered the tomb where Jesus is supposed to have lain for three days. The crux of the Christian faith is a man who died in utter isolation. He was lifted up on the cross above the crowd, beyond touch, made into a naked object. He seemed even to have felt separated from his Father, and his last words, according to Mark and Matthew’s gospels, were: “My God, my God, why have you abandoned me?” In that moment he embraced more than just our deaths. He made his very own the loneliness that we all endure sometimes and that tens of millions live today.

On the night before he died, that isolation was already palpable. He gathered his closest friends around him for a last supper. One of them had already sold him to the people who sought his life; Peter, his Rock, was about to deny he even knew him, and most of the others would take to their heels. In this most chilling moment, he did something utterly startling, taking the bread and wine, and saying “this is my body and blood, given for you.”

When the community was falling apart and everyone faced the future alone, he made the promise of a new communion, which would be stronger than betrayal and cowardice and which nothing could destroy, even death. When the churches are shut and public worship ceases for a while, that promise still holds and the gift is still given.

So, yes, this awful virus may cut us off from each other physically, and that is a profound deprivation. But Christians believe that all our loneliness is embraced in a communion that pierces through every barricade. The risen Lord comes through the locked door behind which the disciples had placed themselves in self-isolation and lifts their fear and loneliness.

Even if we cannot get to the Eucharist, we can still enact symbols of communion. In Northern Ireland, a hotel offered to deliver free meals to people stuck inside their homes: “Call us before 1 pm and order a meal. We will deliver dinner to you that evening—there is no charge for food or delivery.” In Italy, people came out onto their balconies and sang to each other. Music reached into every room to embrace people in their loneliness.

The risen Lord comes through the locked door behind which the disciples had placed themselves in self-isolation and lifts their fear and loneliness.

Indeed, music has an ability to express a hope beyond our words. The opera about 9/11, Between Worlds, by Tansy Davies, had its world premiere in 2015. Some were shocked that anyone should compose an opera about such a horrible event, but perhaps it is the only way to face its brutality. Nicholas Drake, the librettist, said that “putting the transforming power of music at the heart of the drama, we thought, might allow us to weigh the tragedy of what happened on 9/11, and yet discover some kind of light in that darkness. Music even seems to have played a role in helping some people on that day. A security guard sang hymns to those descending the stairs, to give them courage. Some relatives, lost for words as they spoke to loved ones on the phone, sang together.”

Yes, millions of us must endure isolation, but what are the gestures that we can make that put us in touch with those whom we cannot touch? It may be by buying food for those who cannot get out and leaving it on their steps, by phoning and texting. Small gestures can speak of profound belonging.

Every Eucharist recalls what Jesus did in the face of death, defying its threat of ultimate isolation. I was never so aware of this as I was while saying Mass in Syria, less than five miles from the frontline, when gunfire could be heard not far off. The threat of violence was ever-present, and yet hope found expression in our singing and in reenacting that gesture of self-gift that nothing could destroy. Even when I cannot get out to join the community in prayer, God remains present, as St Augustine wrote, “in my deepest interiority.” However lonely I feel, I am not alone, for at the core of my very being is Another.

Timothy Radcliffeis a former Master of the worldwide Dominican Order, which he entered in 1965. His new book, Alive in God: A Christian Imagination, has just been published by Bloomsbury.

Holy Mass is live-streamed every day except Monday at 10am. To join click here