by Peter Stanford in THE TABLET, 7 December 2019 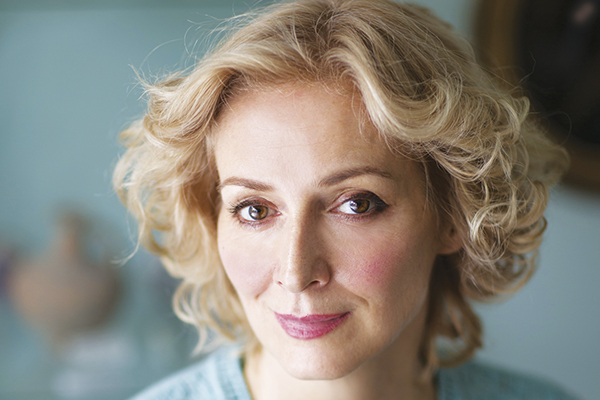 “If I wasn’t a priest,” reflects Marie-Elsa Bragg, “I wouldn’t be publishing this book.” On the table between us as we sit talking in her north London cottage lies Sleeping Letters, a slim volume of little more than 100 pages that explores the suicide of her French mother, Marie-Elisabeth Roche. “It is the priesthood that allows me to give it,” she explains. “Because I am saying, ‘Look, this is possible, and I am in it with you’.”

By revealing her own anguish, she believes, she is sharing something with all those whose lives are framed by loss and mourning. “Grief is something no one talks about. It is universal, and sometimes we are so scared of it. We carry it around with us like a ball and chain because we don’t see that we can go through it, survive it.”

In what is the most striking feature of a book that is part-poetry, part-prose, part-memoir, part-performance and part-spiritual reflection (one fan, the artist and author Edmund de Waal, has likened it to “a kind of dance”), she brings unity to all the different aspects with an account in verse, threaded through the pages, of the ritual of the Eucharist – starting with the altar, the cloth, the candle, the collar box and the robes, building to consecration, and the promise of redemption. To say more would be to spoil it, and this is a book, as one who knows something about grief, that I can unhesitatingly recommend as balm.

“I am trying”, she explains, “to give the reader an experience of what it is like to do the ritual – hence the [stage] directions I have included. It is as close as I can give you to the experience of being a priest.”

Sleeping Letters – the title refers to an imagined conversation between the author, her father and her mother (always known as Lise) – was written, she says, mainly on two recent eight-day silent retreats. The tragic events that lie behind it, though, took place almost half a century ago, when she was just six, but the memory of them remains raw, for Marie-Elsa, as for her father, the broadcaster and writer Melvyn Bragg, and for their wider family and close friends.

At the time of her mother’s death, her parents – who had fallen in love and married as students at Oxford in the early 1960s – had separated, leaving Lise devastated. After her death, father and daughter were, as Marie-Elsa describes, bound together ever after in their grief.

“By evening,” she writes of the day Lise died, “my father arrived and took me to the front pew of a church, held me on his knee and told me my mother wasn’t coming back. He wept with more melody than she had, a deeper moan. He held on to my arms and buried his cheek into my neck. His body hunched as if it might crack.”

What does he make of the book? She pauses. Her way in conversation is not to fill the silence, but to think and carefully chose the exact words she wants before replying, but this time she waits for longer than usual. “I think he is moved and proud to watch me go through it, and come out the other end, but also moved to receive the biggest gift I could ever give him – the healing in the book, saying to both of them, ‘I’ve lived a bit of life so far and I have gone in and come through it. And I hope you both do’.”

From the way that she talks about her mother, it is clear that Lise remains a very real presence in her life, though that can be challenging. Her death, Marie-Elsa says, “has been a continual pain that I’ve seen, and am always in conversation with, and always will be”.

Seen, as in experienced? “I’ve experienced it, but I’ve also seen [as a child] my mother across the table completely breaking, so much so that she is about to die. I’ve seen what that looks like. I’ve seen my dad have a nervous breakdown afterwards.”

Another extended pause – and then without self-regard: “It means I am good at companioning people. It makes me a better priest. Everything goes into being a priest because it is a calling. All of you is taken up to do a job that is not about you.”

As a definition of priesthood, it is as good a one as I have heard, spoken from the heart. But has the connection with her mother also somehow transcended for Marie-Elsa the divide between life and death?

“I feel like I’ve really gone through something [in writing the book]. I feel different. It’s been cathartic. I feel like I have genuinely let my mother go. We will always be companions, but I feel that I have somehow released her. Love continues afterwards. I am still living with her, though she is on the other side and I don’t know what is happening. I feel like I have … perhaps in this deeper river of grace, time is no longer linear …”

For the first and only time, she falters and her eyes fill up. As do mine. It takes a minute or two for her to regain her composure but, when she does, sitting very still and erect in a low, deep armchair, she sidesteps my offer to change the subject to spare her.
“If somehow my mother felt her daughter saying to this her, if there was any chance of this [book] going to her, I’d take it in a second. And [my] laying [the book] on the altar, laying it out for anyone to read, is me offering it up. It is about me, but I hope it has a life of its own. If that touches her, then it is worth it.”

Marie-Elsa Bragg grew up in London, Cumbria and France. In the first place, she was raised by her father and his second wife, the writer Cate Haste, with their two children. In the second, she was wrapped in the warm embrace of her father’s family (and was later to set her debut novel, 2017’s Towards Mellbreak, there). And in the third, she was with her mother’s very Catholic, aristocratic family (though Lise herself, a writer and painter, was an atheist).

Marie-Elsa “missed her twenties”, she recalls, after contracting a rare tropical disease while working as a researcher at the Dian Fossey Research Centre at the University of Stirling. In the eight years it took to recover fully, she found herself increasingly drawn to spirituality. Back in the world, she read theology at Oxford and then trained as a spiritual director with the Jesuits. For a while, inspired by nuns she had met in France, she explored a vocation to religious life with the Cistercians.

“I went on a 30-day retreat but unfortunately the answer was ‘No’, that it was not right for me. I am such an introvert and so devotional that I really thought that was the life I was going to live, but it felt very clear on the retreat that it wasn’t.”

Instead, in 2006 she embraced another calling, and was ordained a priest in the Church of England in St Paul’s Cathedral. She spent six happy years in team ministry in a parish in Kilburn, north-west London. But there have always been other sides to her calling, including being a duty chaplain at Westminster Abbey and an assistant chaplain in the Houses of Parliament, the latter stint during the MPs’ expenses scandal. The pastoral care she was able to give then caused someone to mention her name to a headhunter and, to her surprise, she was offered a job at the Said Business School at Oxford University, running leadership development workshops, which over six years she shaped so that they included a three-day retreat.

More recently, while concentrating on writing, she has been back in the House of Commons, as a holiday-cover chaplain, witnessing all the turmoil of Brexit. She also steps in as a locum at her local Anglican church in Golders Green, and is training to be a Jungian psychoanalyst. She sees no conflict between the two roles. It is all, she says, part of being a priest.

“Please God, I will always be a priest. The centre of me is priesthood. Ritual for me is so creative. Like poetry, when it is done well, with poetic psalms, the space between the words, and the silences between the movement of the ritual, can hold you and take you into a creativity that is so healing.”

She speaks out of experience, but does she worry about being so very open about what are the most private times in her own life, and those of her well-known father? “When the first book [her novel] came out, people asked me a lot about my life. I hadn’t expected that, but it was strangely helpful. When I started writing [Sleeping Letters], it just came out of me, though I had been thinking about writing it for a while. And I hardly changed a word.”

She leaves another gap as she struggles to articulate exactly what she means. “I wonder if the universality of the book is that I am very clearly writing to God. On that retreat, I was very definitely writing to God. That was very much in my sight.”