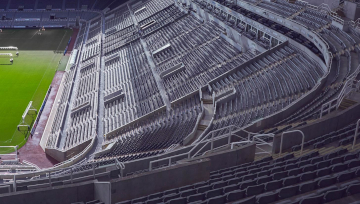 If you go to the match this season you are not in the wrong; Mike Ashley is.

If you boycott televised games you are not in the wrong; Mike Ashley is.

If you boycott the Arsenal game and St. James Park for the rest of the season you are not in the wrong; Mike Ashley is.

Ashley is wrong for this club and he is wrong if he thinks he has a future here. He does not give or build, he only knows how to take and throw his weight around. His bottom-line approach will see this club fail. Perhaps not this season nor the next but we will do nothing except circle the bowl and it will be slow, painful and totally needless.

What we need is a message. Not just to Ashley but also to the Premier League and football as a whole, that this man is toxic. Your brand will be tarnished and your product degraded. The ‘best league in the world’ seeming tolerant of a club existing solely to promote one of the country’s most loathed brands. We need him gone from our club.

Many will say it’s impossible to achieve, that he doesn’t care what we do or say or think but what is it we’ve criticised Ashley for most? A lack of ambition. Now it’s time we become the counterweight – the ultimate display of ambition. Wor flags set records, just look what our fans are capable of. Each of us wants to be stood shoulder to shoulder, United in voice for our club so let’s get ambitious. Let’s change the narrative. Let’s show what can happen when you disrespect a city, a community, a passionate, obsessed fanbase.

To this end, we call on all NUFC supporters to show the world that we will not take it lying down, that we will no longer stand idly by. The first step is to boycott the Arsenal game…

To all fans of Newcastle United FC and all media outlets. Due to the ongoing situation at our great club, we would like to confirm that the following groups are now working together:

Our initial aim is to mobilise a boycott of the Arsenal game (#BoycottArsenal) on the 11th of August with details and plans to boycott future games to be announced in the coming weeks. This is step one in our plan to starve Mike Ashley of the thing he desires most: money.

That’s why we will be focusing on a full boycott of matchday activities at St James’ Park going forward and this will be our mantra until the club has new ownership.

We, collectively, will not be putting another penny in Mike Ashley’s hands and so we have effectively banned ourselves from entering SJP, Nine bar, the club shop or any Sports Direct store nationwide.

We are in the process of organising protests at Sports Direct branches nationwide. More details will follow .

Boycotting is the hardest decision any of us will likely ever make regarding NUFC. We will still support the club and follow them at away games but this no longer feels like ‘our’ club and it is time to make a stand.

We are working tirelessly to find alternatives for fans during boycotted games which we explain below.

We are very happy to announce that we have the support of many local businesses, some of whom are offering special deals on match days for food and drink to fans who boycott the games. This list is ever-growing so please follow the hashtag #SupportOurToon on twitter to keep updated.

This is why we are using the #SupportOurToon hashtag so fans can still enjoy the pre-and post-matchday experience whilst also supporting our local bars, pubs, clubs and restaurants.

Mike Ashley can try and kill our club; he will never kill our proud city.

We welcome any input, support, ideas and help from like-minded supporters and supporters groups worldwide. If you would like to be part of this movement in any way please contact us at SJPBoycott@gmail.com