This Thursday will be the 500th anniversary of the death of Leonardo da Vinci, the Italian Renaissance master who died on 2 May 1519. Perhaps best known for his painting The Mona Lisa, Leonardo is widely considered to be one of the greatest polymaths in human history, being an inventor, artist, musician, architect, engineer, anatomist, botanist, geologist, historian and cartographer.

In addition to his Mona Lisa, Leonardo’s painting of the ‘Last Supper’ is one of the western world’s most recognisable paintings. Completed in 1498, it covers an end wall of the dining hall or refectory at the monastery of Santa Maria delle Grazie in Milan, Italy. It’s huge, measuring 15 feet x 29 feet, and represents the scene of the Last Supper of Jesus with his twelve apostles, as recounted in St John’s Gospel (13:21).

Leonardo’s painting of the Last Supper is reproduced in a modest way in the bas-relief that features in the front panel of our Altar at Holy Name. As in the painting, this ‘carving’ depicts the consternation that occurred among the apostles when Jesus announced that one of them would betray him. Today’s Gospel text features their first encounters with Jesus after that Supper, when he appeared to them in his risen form. So I think that it’s worth taking a brief look at what our own humble ‘carving’ reveals to us, not just about the Last Supper but also about one of the apostles, Thomas, who features in today’s text for Mass (John 20:19-31). 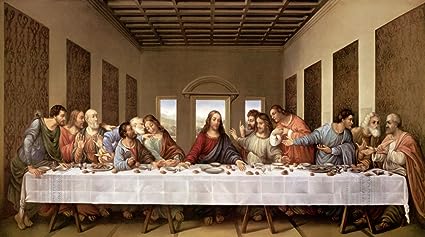 While some of the details of the painting – colour, light and shade – are not in our panel, some other details can be seen.  Leonardo seats the diners on one side of the table, so that none of them has his back to the viewer. The apostles are formed into groups of three, with Jesus seated somewhat alone in the middle.

From Leonardo’s notebooks we know that each apostle in the painting is identified by name. From left to right, we have Bartholomew, James, son of Alphaeus, and Andrew. They are surprised at what Jesus has just revealed about betrayal. The next group comprises Judas Iscariot, the betrayer, and Peter and John. Judas is withdrawn and taken aback by the sudden revelation of his plan. He clutches a small bag, perhaps signifying the twelve pieces of silver given to him as payment to betray Jesus, or, maybe, it refers to his role as the treasurer for the group. Judas is the only person to have his elbow on the table and his head is also, horizontally, the lowest of anyone in the painting.

Peter looks angry and is holding a knife pointed away from Christ, perhaps foreshadowing his violent reaction in the Garden of Gethsemane when Jesus is arrested. He is leaning towards John and touching him on the shoulder, perhaps because in the Gospel accounts he asks John – the “beloved disciple” – to find out from Jesus who is to betray him. John, the youngest of the apostles, appears to swoon in shock and lean towards Peter.

On the other side of Jesus there is Thomas (who features in today’s Gospel reading), James the Greater and Philip. Thomas is clearly upset and his raised index finger foreshadows what we have just read in the Gospel when he declared that unless he could put his finger into the side of Christ, he would not believe that he had risen from the dead. James looks stunned, with his arms in the air, while Philip appears to be looking for some explanation about what’s going on.

The final group of three, on the extreme right, is Matthew, Jude and Simon the Zealot. Jude and Matthew are turned toward Simon, perhaps to find out if he has any answer to their initial questions.

When Holy Name was opened in 1929, this altar was not in place. It was installed a few years later, only after the congregation had managed to raise the funds to buy it. This year we are celebrating the 90th anniversary of the opening of the building, and honouring those first generations of parishioners for the wonderful legacy they have left us, including this altar. With them we are inheritors of the faith of the apostles in the Risen Jesus, expressed by Thomas when he addressed Jesus as ‘My Lord and My God’.

Thomas was slow at first to believe the stories about the Resurrection. He wanted proof, as do we. So, surely, he is the patron saint, of all of us who never stop doubting – be it doubting the existence of God or the Resurrection of Jesus? He encountered an understanding and merciful Jesus. So do we. If you can, after Mass today, take a look at the figure of Thomas in the altar panel (he is nearest to Jesus on the right) and ask yourself what his raised finger says to you?